A profile in Force.com is a metadata used to group users with common data access requirements. It contains a set of permissions for every object defined in the Force.com organization. These permissions determine whether users belonging to the profile are authorized to read, create, edit, and delete records of each object. Also within the profile are rules determining access to individual fields of an object.

Fields can be hidden entirely or defined as read-only directly in the profile or in page layouts.

Permission sets contain the same permission-related metadata as profiles, but a user can be assigned to many of them at once. In contrast, a user is assigned to a single profile at a time. Permission sets are generally used to override profiles on an individual user basis. 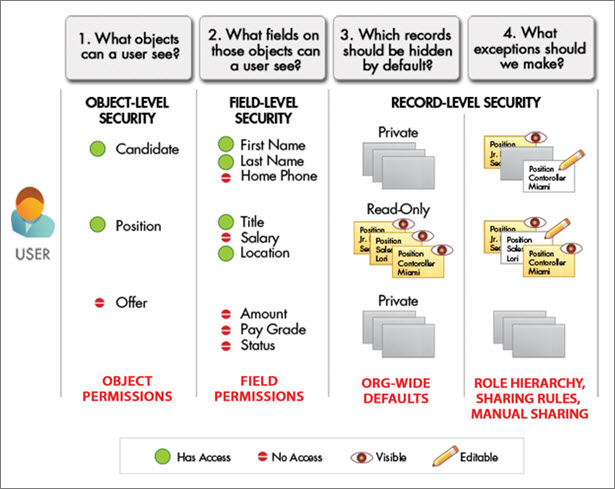 These defaults designate records of each object as private, public with Read and  Write access, or public with read-only access.

4. Sharing reasons – Sharing reasons override the organization-wide defaults. The owner of the requested record is matched against a list of sharing reasons relevant to its group affiliation. If a sharing reason is found, access is granted. Groups are defined as simple lists of users and other groups or as a hierarchy, allowing permissions of subordinates to be inherited by their superiors.